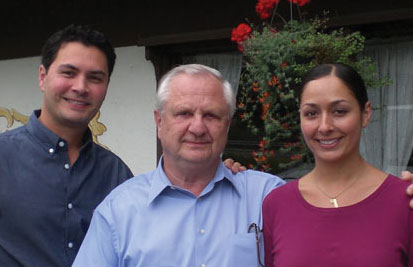 Carrying on the legacy of Julius Boehm, Bernard Garbusjuk has owned and operated Boehm’s Candies for over 35 years. Bernard and Julius’ similar experiences immigrating to the United States from Europe united them in a special bond. For nearly 10 years prior to Julius’ death in 1981, Bernard worked closely under Julius. During this time, he not only learned the special recipes of Boehm’s confections, but also grew to love and appreciate the unique history and charm that makes Boehm’s Candies the attraction that it is today.

Bernard not only comes from a long line of Austrian candy makers, giving him the innate ability to learn the delicate craft of chocolate making, but also underwent extensive culinary training in Germany. After working as Julius’ assistant, Bernard became head candy maker, running the daily production. To this day, as owner of Boehm’s Candies, he continues to work closely with the candy makers, developing new confections and jumping back into the kitchen as a candy maker when needed.

Boehm’s Candies is truly a place of tradition, as even most of the staff have been with the company for over 15 years. Bernard is now passing this legacy on to his children, Tyson and Narissa, who are learning the company just as he did – from the ground up.