Our founder, Julius Boehm (1897-1981), was born in Vienna, Austria.  His father was Austrian and his mother Swiss. 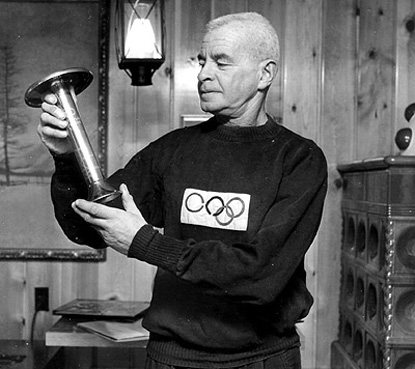 Julius examines the Olympic torch he once carried for the 1936 Olympics in Berlin, Germany.

In 1924, Julius ran with his Austrian team in the 400-meter relay in the Paris Olympic Games, and in 1936, he was honored by being selected to carry the Olympic torch en route to Berlin for one kilometer over Austrian terrain.

As Julius had become a child of the mountains, he utilized his mountaineering skills to escape Hitler’s tyranny in 1940 and fled to Switzerland.  From there he came to the Pacific Northwest in 1941.

In 1942, Julius and friend George Tedlock opened their first Candy Kitchen in the Ravenna area of Seattle.  Julius drew upon the wisdom of his grandfather, a pastry chef to perfect the European line of confections while a mutual friend, candy maker Cecil Hall, helped refine the American line of chocolates. 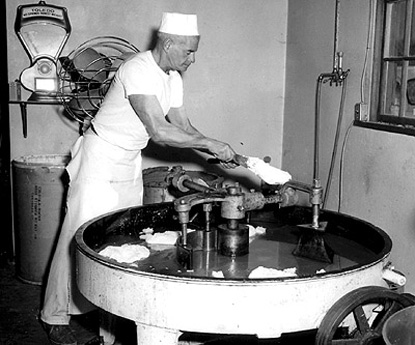 Julius adding butter and other ingredients to a cream filling.

In 1956, Julius moved Boehm’s Candies to the Issaquah foothills.  The natural beauty of the green landscape and mountains reminded Julius of his homeland.  The “Edelweiss Chalet” as it was named (symbolizing the beautiful flower of Switzerland) was the first Alpine chalet in the Northwest.  A great craftsman, Walter Schefer, from Appenzell, Switzerland, gave the chalet its distinctive look.

The chalet was adopted by the School of Architecture at the University of Washington as an authentic Alpine chalet.

In recognition of Julius’ public service and donations, the City of Issaquah proclaimed September 30, 1978 as Julius Boehm day.  Shortly after in 1981, the King County parks system renamed the Issaquah District swimming pool the Julius Boehm Pool. 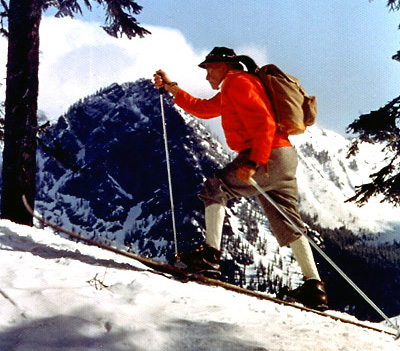 Conquering Mt. Rainier was something Julius did three times during his life.

Throughout the years, Julius was very active in many sports including water polo, skiing, swimming, and hiking.  He spent many years teaching local youth how to ski and swim.  He also established his own ski school.  Conquering Mt. Rainier was something Julius did three times during his life.  At the youthful age of 80, Julius embarked on his last summit and amazingly climbed the 14,410 feet to the peak of Mt. Rainier.

Shortly before his death at age 83, Julius’ vision of a shrine to mountain climbers was completed.  Next to the Boehm’s retail store and manufacturing plant, a replica of a 12th century chapel in Switzerland was built.  The interior of the chapel features a recreation of Michelangelo’s Creation of Man suspended from the ceiling.  Behind it, a mural portraying a fallen mountaineer being raised into the mists by a Christ figure merges with an altar of stone. 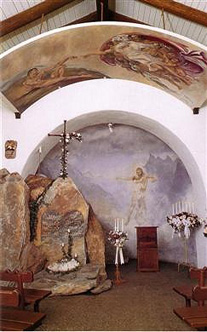 The 50-seat chapel is frequently reserved for weddings. (www.highalpinechapel.com) The chapel can be seen today during guided tours (reservations required).

Today, we offer over 100 confections, produced by master candy makers.  Everything from American favorites such as caramels, English toffee and peanut brittle, to European specialties like Mozart Kugeln, marzipan, and Cordial Cherries are made to the highest standards.

Our history and heritage set forth by Julius Boehm run true to this day.  We invite you to stop by the Edelweiss Chalet in the foothills of Issaquah, take in the old world charm, and taste some of the finest chocolate confections ever crafted.

As Julius proclaimed about his candies –  “As High As the Alps in Quality”.

To learn more about our current ownership, click here.